The 2021 Pindrop Voice Intelligence & Security Report report examines contact centre fraud rates and the newest fraud tactics, and details how fraudsters are using the IVR as a gateway to cross-channel fraud. The report also provides insight into scams around unemployment fraud, government loan scams, and easily extracted data, info on accounts, updates on money movement, all through unprotected IVRs. Click here to download a copy of the Report from PinDrop Web site

Bring your own device guidance – https://www.ncsc.gov.uk/collection/mobile-device-guidance/bring-your-own-device

Resources for fighting fraud and cybercrime

The Little Book of Scams

The Little Book of Cyber Scams

The Little Leaflet of Cyber Advice

The Little Book of Phone Scams

Moneywise has produced an article that states that the Crown Prosecution Service recovers just £1 for every £6,000 stolen

In the fight against fraud, the Midlands Fraud Forum (MFF) has joined with the Insolvency Service to launch a series of 13 fraud prevention videos.  The films are unique and no organisation has ever made a series of films of this nature and brought them together in one place.  These videos are written and produced by the MFF and no public funding was used.

The films portray the stories of actual victims of crime, told by actors.  They range from advice from a retail manager on how to avoid crime, cyber enabled fraud and romance fraud through to elderly victims who have been preyed on.

Research has shown a victim of romance fraud loses on average £10,000, so if only one romance fraud can be avoided, the costs of making the videos will be worth it.

Each of the films give an “if only” message that the victim has learnt the hard way.  It may be “if only I had checked” or “if only I hadn’t been so greedy”.

Victims portrayed in the films range from an 88 year old ripped off by her carer through to three students who describe how they were scammed via the internet and social media.

There are no restrictions on the use and distribution of the videos and the MFF hope to spread their anti-fraud messages as wide as possible.  Although the films are copyrighted, the MFF believe they are ideal for training purposes, education and generally warning everyone to just “TAKE FIVE” before getting involved in something being offered.  If something seems too good to be true, it probably is!

Please share the messages with your contacts, friends and family to help stop fraud. For social media please use our hashtag: #IFONLY.

A report from the Fraud Advisory Panel on the current state of ethics in business and the need for a corporate culture of honesty and trust, to help combat fraud.

Financial Fraud Action UK (FFA UK) is responsible for leading the collective fight against fraud in the UK payments industry. Its membership includes the major banks, credit, debit and charge card issuers, and card payment acquirers. Through industry collaboration FFA UK seeks to be the authoritative leader in defending consumers and businesses from financial fraud, by creating the most hostile environment in the world for fraudsters.  The FFA UK Annual Review provides details of its work over the past 12 months.

Fraud, cyber, and security incidents are now the “new normal” for companies across the world, according to the executives surveyed for the 2016/17 Kroll Annual Global Fraud and Risk Report1. The proportion of executives that reported their companies fell victim to fraud in the past year rose significantly to 82%, from 75% in 2015 and 70% in 2013, highlighting the escalating threat to corporate reputation and regulatory compliance. 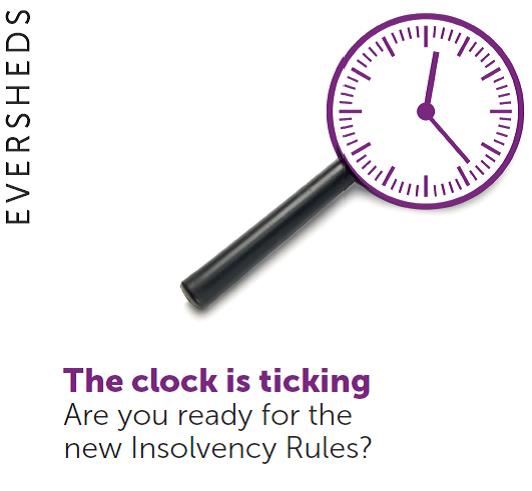 Eversheds : The clock is ticking Are you ready for the new Insolvency Rules?

The Insolvency (England and Wales) Rules 2016 will come into force (with effect from 6 April 2017). This date has been long in the making – the first draft of the new rules was published in September 2013. The new rules are not intended to change the law. Their main aim is to consolidate provisions in order to reduce repetition, ensure that there is a more logical structure and modernise and simplify the language (including gender neutral drafting). This briefing highlights a few of the key changes.